Get it here: Barnes & Noble, Amazon

I must admit. I've been waiting for "Rogue Descendant" to come out ever since I finished the second book in the series (Deadly Descendant) last fall. This is the third in the Nikki Glass series by Jenna Black.

I've mentioned it before but I might as well say it again: If there's one thing that gets my reading juices going it's a good story that incorporates Greek mythology into it. One of the reason's I fell in love with the series to begin with was the fact that the main character is a descendant of the Greek goddess Artemis. (Which is also the name of one of my kittens. The other is named after Athena - yes, that's how much of a freak for Greek I am).

Now, I've read a few great series about Greek mythology such as Rick Riordan's Percy Jackson novels and the Dark Hunter series by Sherrilyn Kenyon. But what I love about the Nikki Glass series is that not only is there Greek mythology but Black mixes in other cultures like Indian, Egyptian and Nordic mythology. Basically, I get OD'ed on mythology. 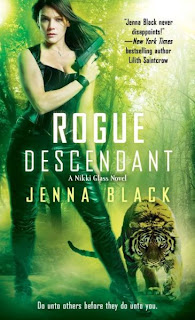 To recap (I'll try not to spoil anything here): There are two warring factions of descendants - the Olympians, aka the bad guys, who are pretty much elitist bastards who believe being a Greek immortal puts them above the rest of humanity and descendants from other pantheons. Konstantin and his son Cyrus lead this bad of the morally corrupt.

Then on the other side you have the small group of "rogue" descendants who are either not Greek or have no desire to be an Olympian. The seven of them are led by Anderson Kane, who we found out in the first book is one BAMF you don't want to mess with. Together the two groups live somewhat peacefully under and old truce. A truce which will be tested many times in "Rogue Descendant"

The third book starts off a little slow and to me it felt like most of the it was spent wrapping up all the shit that hit the fan in the second book. Now, that doesn't mean it wasn't excellent. Black, thankfully is a great writer, and clearly it was a fantastic read since it just came out yesterday and I'm writing about it today.

Naturally, things get the most interesting in the very last chapter (darn you Black and your cliffhanger) and now I will be counting down the days until book numero cuatro.

The only thing I was a little disappointed in was that a few of the other descendants living with Nikki Glass barely show up in the book. Jack isn't in it at all, he only gets mentioned once in passing. Maggie has one scene in the middle and Blake doesn't have his one scene until the end where he stands there. So I'm hoping they get more page time in the next book since I really enjoy all of them.

All in all, definitely a must read.