Hope's Reign by Selina Fenech is the second book I've read by this author. The first, of course, being the predecessor of this book titled Memory's Wake.

There are some neat things I liked about these two books. One was the fact that the author is also an artis,t so she combined her two talents. Both books have hand drawn illustrations included throughout.

This is actually the first time I've seen something like this, and I wasn't quite sure if I like it at first but it slowly grew on me. They gave me the ability to gain a better visual on the characters and they are just plain beautiful drawings. It's art I can appreciate.

Now, let's talk about the actual books. I will try to keep it as vague as possible and not give out too many spoilers but it's harder when talking about the second book in a series. 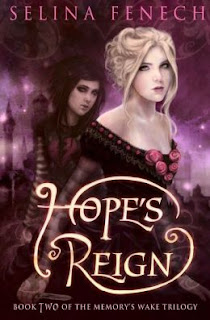 The series starts off with one of the main characters, Memory, colliding with the second main character, Eloryn, as she is fleeing for her life. Memory has pretty much appeared out of nowhere with no memories or sense of who she is.

Right away the book starts off with action as the pair tries to escape those who are after them. We find out a little later that the current king has been looking for Eloryn ever since he killed her parents.

Soon after they shake the men after them, we meet the other two main characters in the series: Will, a wildling who seems to recognize Memory, and Roen, the seventh son of a duke, turned thief.

The story progresses through all four POV's which can get tricky. Sometimes it can get distracting jumping from person to person but Fenech did a good job with it. It mostly stays in Memory's POV with the other three popping in every so often.

The main objective in Memory's Wake is to figure out what happened with Memory's memories, find Eloryn's guardian and take on the evil king in the process.

In Hope's Reign the story revolves more around the memories that have yet to surface. We find out that Will knows most of Memory's life story because they were in a group home together before the events of the first book took place.

From him we see that Memory's life wasn't a fairy tale and that some bad things have happened.

Which begs the question: what if the memories she so desperately searches for are worse than she ever imagined.

The second book takes a little bit of a darker turn as some of her memories start to surface and she deals with jealousy, anger and feeling abandoned. Her grip on reality starts to slip a little and she feels like she's going crazy.

What I really like about the two stories is the mix of our modern world with the mystical and magical world Memory find herself in. Memory speaks with slang that familiar to us today while everyone else is usually confused by what she's saying. I thought that was an entertaining piece in the story.

The stories are well written even though at times I did get annoyed with the two girls. Mostly, they're just a little too much of the angsty teenager for me. Then I remind myself that I was no better at that age.

Memory's Wake and Hope's Reign are two great fantasy, YA books with a dash of romance and magic weaved into it.

This will definitely be a re-read for me.