Day 3 - My favorite series... The Infernal Devices by Cassandra Clare

Picking my one, single favorite book series was difficult for me. In fact, it was a bit too difficult because there are many series I love. So I'm going to talk about one series that is definitely one of my top favorites.

*Drum roll*... It's the Infernal Devices series by Cassandra Clare. I originally started out reading her Mortal Instruments series which came out first. I really just fell in love with the world she created and the shadow hunter universe.

Then the Infernal Devices came out with it's first book titled "Clockwork Angel" and I fell even deeper in love. This series is a prequel series to the Mortal Instruments. It takes place in the late 1800s and Clare added a steampunk aspect to it.

This was my first time delving in to the steampunk world and I will never go back. Not only are all these books beautifully written but Clare's world building skills are absolutely phenomenal. There's always so much going on, but you never get lost.

So far there are three books in the series and I'm still working on the last one. As of right now I'm not sure if there will be a fourth or not.

In addition to the great writing, all the books have magnificent covers. That's right, I said magnificent. I go a little weak-kneed every time I see them in fact. 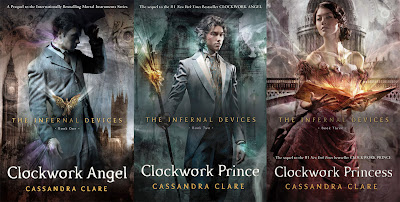 Coming up tomorrow: I'll let you know which of the Infernal Devices was my favorite so far.
Posted by Book Nerd Paradise at 4:15 PM