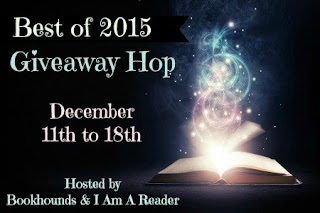 2015 was a good year for me. I read a ton of great books, moved into a new house and made some great new friends. So to celebrate the year, I've jumped on the Best of 2015 Giveaway Hop hosted by Bookhounds. There were two books this year that topped my list. Whoever wins this giveaway will get to chose which one they would like to receive of the two.

The bloodmage Volcrian is dead, but a new enemy lurks in the shadows. The Shade, a fanatical cult of demonic assassins, is trying to resurrect the Dark God and unleash His power back into the world. In their wake, a deadly plague is spreading across the land.
Sora and her companions are the only ones who know of the plague’s true source. As the disease spreads, Sora must journey to the City of Crowns to retrieve The Book of the Named, her only hope of stopping The Shade. She and her companions arrive just in time for the winter solstice festival, a notorious two-weeks of fine wines, grand parties and legendary debauchery. Sora must don the guise of a noblewoman and infiltrate the First Tier nobility to stop The Shade before it’s too late.
Meanwhile, the assassin Crash is confronted by a ghost from his past. As he uncovers more of the Shade’s plot, he finds himself face-to-face with his old Grandmaster, the one who both trained and betrayed him. Can Crash lay to rest his past, or will he succumb to his inner demon and rejoin the man who once made him a killer?

My reviews of the books in this series: Sora's Quest & Viper's Creed, Volcrian's Hunt, Ferran's Map

Piper Griffiths wants one thing in life: To become a Consul, a keeper of the peace between humans and daemons. There are precisely three obstacles in her way.The first is Lyre. Incubus. Hotter than hell and with a wicked streak to match. His greatest mission in life is to get Piper into bed and otherwise annoy the crap out of her. The second is Ash. Draconian. Powerful. Dangerous. He knows too much and reveals nothing. Also, disturbingly attractive — and scary. Did she mention scary?
The third is the Sahar Stone. Top secret magical weapon of mass destruction. Previously hidden in her Consulate until thieves broke in, went on a murder spree, and disappeared with the weapon.

And they left Piper to take the fall for their crimes.

Now she’s on the run, her dreams of becoming a Consul shattered and every daemon in the city gunning to kill her. She’s dead on her own, but there’s no one she can trust — no one except two entirely untrustworthy daemons... See problems one and two.

Piper Griffiths wants one thing in life: To become a Consul, a keeper of the peace between humans and daemons. There are precisely three obstacles in her way.


Powered by Linky Tools
Click here to enter your link and view this Linky Tools list...
Posted by Book Nerd Paradise at 12:10 PM