I started following Sora, Crash and Burn's journey last year when I stumbled upon the first book in the series, Sora's Quest. (Side note: if you haven't read my review of the first two books, you can do that here.) 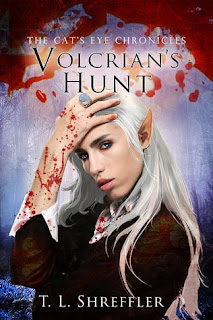 So when the chance came for me to get my hands on an ARC of book three, Volcrian's Hunt, I jumped at the chance. Then I proceeded to count down the days until it arrived in my inbox. And when it finally did, I read  it straight through, only stopping for food and bathroom breaks.

When we left off at the end of Viper's Creed, Sora, Crash and Burn have just commandeered a ship with the help of their Draconian friend in the search of the Lost Isles. Volcrian, the Wolfy mage, is hot on their trail and desperate to find them.

Volcrian's Hunt picks up almost immediate after that point. Soon the crew finds themselves in the middle of the worst storm they can imagine and they end up beached on a seemingly abandoned island.

Meanwhile, we also read from the point of view of Sora's mother, Lori, and she and her old friend Ferran search out answer to aid Sora's on her quest to destroy the Dark God's artifacts and preventing the world's destruction. In this third book we have a lot more narrators than we do in the first two. I like this because I feel it gives the story more depth and we get to see a number of different personalities and ways of thinking.

Also at the same time, Volcrian - who has basically gone bat shit cray cray at this point - has followed the crew on the the open waters and starts to close in on them.

Will Sora get to the lost isles before Volcrian catches up to them? Will Lori find the answers need to save her daughter? Will Sora finally learn the secret Crash has been keeping?

You're going to have to read it to find out. The release date is set for Sept. 30 so make sure to grab a copy.

My favorite part about this book is the progression of Sora and Crash's relationship. What I love about this series and how it's written is that the relationship is so subtly done, sometimes you question whether there is a relationship at all. I hesitate to even call it a romance because it's not the typical, in-your-face, romance.

You get to see these small moments where Crash sheds his gruff, assassin ways and he's gentle and almost sweet - in his own way. It's these small moments that I live for. There's only a handful in each of the books but that's what makes their relationship so enjoyable to read.

For the most part, Crash sticks to his lethal assassin ways without apology. He is what he is. I That's one of the part I love about Crash's character. So many times you see an assassin as a lead character but they almost never actually do any killing or assissin-like things. Not Crash, he makes you remember that he is a killing machine - always was and probably always will be.

Now, it's come down to rating time. I hesitate to give out 5 stars for any books, because I feel that giving it 5 stars is saying that it is absolutely perfect and there are no improvements to be made. I'm a person that strongly feels there is always room for improvement. But on the other hand even 4.5 stars feels too low and would be cheating to book.

So I have to go with 5 stars. But if you want to see for yourself, you can always download Sora's Quest for free!

And for anyone who is wondering, I do believe there are at least two more upcoming books to be added to the series, so the story doesn't end here.

*I was provided an ARC copy for an honest review

Find out more at www.catseyechronicles.com


A plague is spreading across the land. Crops are rotting. People are dying in the streets. Sora, with the help of her magical Cat's Eye necklace, is the only one who can stop it.
She must travel overseas to the Lost Isles, a place of legend and mystery. Only there can she destroy the bloodmage, Volcrian, putting an end to the curse. She is accompanied by Crash, a lethal assassin who once threatened—and saved—her life. But Sora is beginning to question her dark companion. He seems to be carrying a secret; a hidden past that could endanger them all.


Meanwhile, they are hunted by an underground society known as the Shade. For centuries, the Shade has waited for the perfect opportunity to step into the light. Now they are perilously close to resurrecting a Dark God and unleashing a wave of unimaginable destruction. They only need to collect the three sacred weapons, and Sora has already found two.... 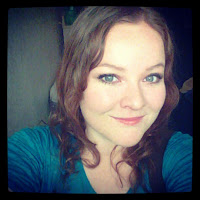 T. L. Shreffler lives in Los Angeles, CA. She loves diversity, fantasy, romance, iced tea, long walks, philosophy, and thrift store shopping. She recently graduated with a BA in Badass (Creative Writing) and her poetry has been published consecutively in Eclipse: A Literary Journal and The Northridge Review. She works as the assistant editor for the funky and fantastic Tinsel Tokyo Magazine.

a Rafflecopter giveaway
Posted by Book Nerd Paradise at 9:44 AM