Today, I'd like to introduce Amanda as a new contributor here at Book Nerd Paradise. She has so kindly volunteered to write reviews for the blog, and together we're going to be able to bring you even more awesome authors to check out! So, get your scroll on an check out her first review below.
Happy reading.


Some people attract stray cats. With Mattie Blackman, it's demons. At work, in her car, even at the foot of her bed. And with the FBI on the hunt for a rogue demon master, she's desperate to get rid of them. Thwarted at every turn to solve her problem through legitimate channels, she turns to Shore Haven's sexy mage for the answer: a fate she refuses to accept.

But as the serial killer's victims pile up, Mattie realizes there's only one way to stop a demon master. To save her friends and the people she loves, Mattie must choose between her life and her destiny. 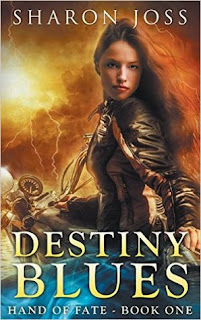 I really like a story that starts in the middle of things, and Destiny Blues definitely delivers. The first chapter introduces us to Mattie Blackburn and we learn three things about her right off the bat: She’s single, she likes to follow the rules, and she’s just figured out she’s attracting demons.

While Mattie doesn’t like to step outside the law, her demons (or pre-demons, as they aren’t fully developed) have other ideas. Their presence causes Mattie a huge headache and puts her hard earned job with the city at risk. Little does Mattie know, she’s going to face an even bigger dilemma when some of the missing pieces of her past start falling into place.

The thing that made this story work for me was the character of Mattie. I’m not normally a fan of stories told in the first person, but in this case it worked. Mattie is self aware enough to realize her own short comings, but she doesn’t lack confidence. She’s also funny and honest so I didn’t mind being inside her head.

The other characters are also pretty interesting, but perhaps not as well developed. I liked Rhys, the really gorgeous mage who Mattie seeks out when she can’t get rid of her demons, but I didn’t feel an immediate spark between him and Mattie - and I really wanted to. I did find that their relationship improved as the story progressed and I really like them together. I think I wanted to see more tension between them at their first meetings. It seems like this relationship will play out in the future books and that’s something to look forward to, especially as Rhys only gets more interesting as the story progresses.

At its heart, Destiny Blues is a murder mystery, and while that’s what drives the story, the questions about Mattie, her past, and her future role are where the reader will likely get the bigger payoff. While this story features adult characters, the plot is fairly PG (some violence and suggestive language) and would be acceptable for mature YA and NA readers.