Daybreak (Girl from the Stars #1)

Liora Day, half-human, half mess-with-her-and-you’ll-die Damaclan, had been thrown onto a rough path at a very early age. But when she is broken out of a cage by Devren, the young captain of the SS Kratos, she is shown that perhaps humanity does have a heart. The Kratos is set on a mission to rescue fallen surveyors from the Revolutionaries, and Liora is given the choice to follow her Damaclan instincts, or trust Devren’s dark eyes and captivating smile that promise an adventure unlike any she has ever experienced. 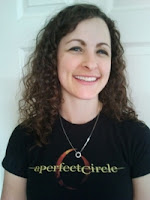 Cheree Alsop is an award-winning, best-selling author who has published over 30 books, including two series through Stonehouse Ink. She is the mother of a beautiful, talented daughter and amazing twin sons who fill every day with joy and laughter. She is married to her best friend, Michael, the light of her life and her soulmate who shares her dreams and inspires her by reading the first drafts and giving much appreciated critiques. Cheree is a fulltime author and mother, which is more play than work! She enjoys reading, traveling to tropical beaches, spending time with her children, and going on family adventures while planning her next book. Cheree and Michael live in Utah where they rock out, enjoy the outdoors, plan great quests, and never stop dreaming. You can find Cheree's other books at www.chereealsop.com


Liora twisted the bent end inward until she felt the teeth slide free. She slipped the bar from the handcuff and let it fall off her wrist. In two more seconds, the other cuff was on the floor.

The lock of her cage proved to be more difficult. Luckily, Liora had the two pieces of the tweezers to work with. She bent the second one to match the angle of the first. Following the same steps the apprentice had done so many times, Liora pushed the bent end of the first piece into the lock opposite the pins. She turned it slowly upward until it was in tension.

Inserting the second piece, Liora raked it slowly along the pins. The small metal on metal sound set Liora’s nerves on end. If Malivian found out what she was doing, she would be tortured again. The voice in the back of her mind whispered that perhaps she wouldn’t survive a second round.

A subtle, metallic click sounded. Liora’s heart jumped. She pushed at the bars. Her breath caught in her throat when the door swung outward. Liora stepped onto the cold floor and stumbled lightheadedly. She caught herself on the next cage, pushed upright, and ran down the hall.

The alarm sounded when she hit the button for the hatch to open. As soon as the gap was wide enough, Liora jumped out. Her feet, then her knees, hit the deck of Gaulded Zero Twenty-One. She shoved up to her feet once more and ran past the other starships.

Even at the late hour, the Gaulded’s landing deck was filled with activity. It appeared the Kratos and Kirkos weren’t the only ships who had been attacked. Blow torches, plasma cutters, and blazers filled the contained air inside the Gaulded’s hold with the acrid scent of metal. The sound of mallets and hand saws sounded from every corner.

Crew members of the ships Liora passed turned to watch her go. She felt conspicuous and alone as she darted between space crafts and around repair gear. A giant pallet of artillery swung over her head. Liora ducked and made her way along the stripped hull of a Copper Crow painted to look like an iridescent fish. The name Space Poseidon glowed near the hatch.

Liora ran around the corner and slammed into Devren.

“I was about to come looking for you—” he began.

Devren gently pushed her back so he could see her better. Liora dropped her gaze at his gentle probing.

“Malivian did this to you?” he asked.

The anger in his voice made Liora look up. Devren appeared ready to kill someone.

“Calm down,” Tariq told him. “Let’s get her to the ship. It’s the only place we’ll have leverage.”

Devren put a protective arm around Liora. Tariq walked behind them like a bodyguard. Liora felt as though she had entered some different reality. Somehow, even with the thought of Malivian coming after her, she felt safe between the two humans who had entered her life by accident.

a Rafflecopter giveaway
Posted by Book Nerd Paradise at 4:28 PM