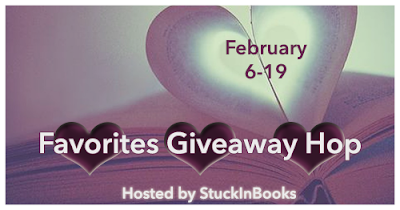 First, thanks to StuckInBooks for hosting the Favorites Giveaway Hop. Obviously, this hop is about our favorite books, but I just have way too many. So, I narrowed it down to the last six months or so.

1. Heart of Ice by K.M. Shea
Rakel, a princess by birth, has spent most of her life exiled on a barren mountain, despised because of her powerful snow magic. Though she longs to be accepted, she hides in her ice-castle and lives with the fear that her brother—the King—will one day order her execution.

Her empty life changes forever when an army of magic users—led by the enigmatic Colonel Farrin Graydim—invade her home country and plan to enslave its citizens. Swallowing her fear, Rakel joins forces with her jailers and uses her magic to save the people who scorned her.

If Rakel cannot defend her homeland, the country will be lost.

2. Demon Princess by Kassandra Lynn (Review)
With her father gone and her brother missing, Demon Princess Adriana has to assume the throne, temporarily becoming the Demon King. The procession is underway, and the princess is nervous yet determined … until the unthinkable happens and she is summoned! Somehow, Aldric, a mage-in-training has summoned the princess into the human kingdom. Now trapped, Adriana must hide her identity and escape before she loses her life in the hands of her mortal enemies.

3. Poison by Chan Lan
Since the night her mother was murdered, sixteen-year-old Rory Gray has known one truth: There are no good Seeders.

In post-apocalyptic Australia, the scientists known as Seeders have built a Citadel surrounded by food-producing regions and populated with refugees from the wars and famine. To maintain their control, the Seeders poisoned the land and outlawed the saving of seeds.

It’s been six years since Rory graced the Seeders’ circus stage as the Wind Dancer and still the scars on her body haven’t healed. Even worse are the scars on her heart, left by a Seeder boy who promised to protect her.

Now the Seeders are withholding supplies from Rory’s region for perceived disobedience. Utilising the Wanderer knowledge she received from her mother, Rory must journey to the Citadel through uninhabitable terrain to plead for mercy.

However, the Citadel isn’t as Rory remembered. The chief plant geneticist is dying and rumours fly that the store of viable seed is dwindling. The Seeders are desperate to find a seed bank they believe Rory can locate, and they will stop at nothing to get it.

To defy the Seeders means death. But Rory has been close to death before--this time she’s learned the value of poison.

Recommended for fans of The Hunger Games, strong protagonists, circuses and nature!

4. Air Awakens by Elise Kova
A library apprentice, a sorcerer prince, and an unbreakable magic bond...

The Solaris Empire is one conquest away from uniting the continent, and the rare elemental magic sleeping in seventeen-year-old library apprentice Vhalla Yarl could shift the tides of war.

Vhalla has always been taught to fear the Tower of Sorcerers, a mysterious magic society, and has been happy in her quiet world of books. But after she unknowingly saves the life of one of the most powerful sorcerers of them all—the Crown Prince Aldrik—she finds herself enticed into his world. Now she must decide her future: Embrace her sorcery and leave the life she’s known, or eradicate her magic and remain as she’s always been. And with powerful forces lurking in the shadows, Vhalla’s indecision could cost her more than she ever imagined.

5. The Last Necromancer by C.J. Archer (Review)
Victorian London: For five years, Charlotte (Charlie) Holloway has lived as a boy in the slums. But when one theft too many gets her arrested, her only means of escape lies with a dead man. Charlie hasn't raised a spirit since she first discovered she could do so five years ago. That time, her father banished her. This time, she brings even more trouble upon herself.

People are now hunting Charlie all over London, but only one man succeeds in capturing her.

Lincoln Fitzroy is the mysterious head of a secret organization on the trail of a madman who needs a necromancer to control his newly "made" creatures. There was only one known necromancer in the world - Charlotte - but now there appears to be two. Lincoln captures the willful Charlie in the hopes the boy will lead him to Charlotte. But what happens when he discovers the boy is in fact the young woman he's been searching for all along? And will she agree to work for the man who held her against her will, and for an organization she doesn't trust?

Because Lincoln and his ministry might be just as dangerous as the madman they're hunting.

Rules: This giveaway is open internationally to anyone who is able to receive their prize as an Amazon gift. I hope you can find your next favorite on this one!
a Rafflecopter giveaway