Birthright is a book that starts off with a bang. In the first chapter we meet our two main characters, Liz and Michael. Liz is at a hearing (or you could call it a trial) in front of the vampire council. We learn that in the last two days Liz has gone from a normal 24-year-old, human woman to a roided out vampire.

The story goes a little like this: Liz met Michael while she was out with her friends at the fair and decides to go off with him for a little make out session. And who wouldn't? He's a total hottie. 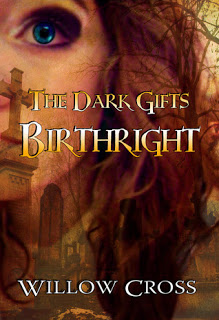 Turns out, he was just looking for his next meal. I have to point out that in Birthright vampires live by a set of rules imposed by the council. In order to create a new vampire they must gain approval and it takes three bites before a human can turn. Vampires do not feed on humans more than twice because of this.


When Michael bites Liz she almost instantly turns into a vampire which makes her special. But at the same time it puts Michael in a lot of hot water for breaking the laws.

So that brings us back to Liz, standing in front of the council, waiting for judgement. After the council members go into both their minds to find out what happened, they find them both innocent of any wrongdoing.

Many of the other vampires are outraged. You see, Michael happens to be the council assassin. He's sent to dispatch any vampire who doesn't uphold the laws or ones that go rabid. He doesn't have a lot of fans in the vampire community because most have lost someone they cared about to his hand.

So it's no surprise when a civil war breaks out not long after Liz is caught up to speed on vampire life. The council finds her to be an interesting specimen since humans who turn almost instantly are a thing of legend. Liz agrees to stick around and let them study her.

Here are my thoughts on the story: It's mostly a paranormal romance with a dash of fantasy. Typically, I have this hatred towards PNR because I just feel they've been beaten to death over and over and over again.

But this was one story I really did like. I enjoyed both Liz and Michael's characters and their romance was something even a cynic like me enjoyed. Even if it was a bit to shot-gun-wedding-esk.

Overall the story was nicely done, a few spelling errors here and there but nothing to distract from the overall story.

The only thing I did not like was the pace of the story. From the beginning I felt like it was a race horse right out of the starting gate and it never really slowed down. I'm a person who likes a chance to catch my breathe every now and then.

Even with that, the characters were well done and Cross did an great job with the story building. The vampire society isn't the same one as the traditional one and it's very easy to see in your mind.

I give Birthright a solid 4 stars and recommend it for fans of paranormal romance.
Posted by Book Nerd Paradise at 11:19 AM