Jade Crow lives a quiet life running her comic book and game store in Wylde, Idaho. After twenty-five years fleeing from a powerful sorcerer who wants to eat her heart and take her powers, quiet suits her just fine. Surrounded by friends who are even less human than she is, Jade figures she’s finally safe.

As long as she doesn’t use her magic.

When dark powers threaten her friends’ lives, a sexy shape-shifter enforcer shows up. He’s the shifter world’s judge, jury, and executioner rolled into one, and he thinks Jade is to blame. To clear her name, save her friends, and stop the villain, she’ll have to use her wits… and her sorceress powers. 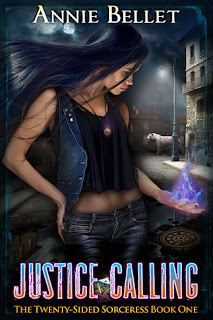 Justice Calling is a fast-paced read with an episodic feel that I hope continues into the rest of the series. There’s an overarching story line that appears as though it will carry on in the following books, but there was also a satisfying conclusion to book one.

The story gets straight to the action, introducing us to Jade Crow, a more-than-she-appears supernatural being trying to blend in with the animal shifters and other supernatural beings who live in the small town where she runs a comic and gaming store. Jade is strong, independent and keeping a secret. At least, she is until a shifter named Alek comes to town and figures out who and what she really is. The dynamic between Jade and Alek is immediate and I enjoyed their interactions, though I would have liked their relationship to spend more time in the ‘getting to know you’ phase.

The world building is subtle, but effective. The explanations of the shifter hierarchy and the supernatural groups is done through casual conversation rather than lengthy explanations. I got the impression that I knew enough for the current story, but that there would be more revealed as time went on.

A particularly interesting aspect of this series is the role played by gaming culture. These references made throughout the story add an extra element of interest that also gives the secondary characters a common starting point for coming together. There’s also something about outsiders like shifters finding solace in gaming that resonates.

Though classified as urban fantasy, Justice Calling will also appeal to readers of paranormal mystery. The use of profanity, while generally employed to lighten the mood, makes this a series for readers of NA rather than YA fiction. This isn’t a lengthy read, making it ideal for quick reading in one or two sittings. It’s the perfect story to get you through a long commute or a quiet weekend afternoon.