**A special thanks to b00k r3vi3ws for putting together this event!

As I sat here contemplating who to feature for this post on International Authors' Day I became a little stuck. There are so many fantastic authors out there. Where do I even begin to narrow down my choices? For something like this I always love to feature indie/self-pubbed authors because they just don't get enough credit.

Then, BAM, just like that it hit me. I knew exactly who I was going to feature for this year's blog hop. Disclaimer: I personally know this author. However, she has no idea that I run a blog or that I'm spotlighting her.

Let me tell you a little about Joan and how I know her. We both work at a mid-sized newspaper in the Midwest. I'm one of the copy editors on the design staff and Joan is the semi-retired, part time proofreader who catches all my mistakes. Over the four years I've been here, without fail, she's walked in here every single day with a bright smile on her face.

Joan recently took her first steps into self publishing to get out her fourth novel, Escape from Ambergris Caye. It's been amazing to watch her learn a brand new skill set and deal with all the trials and tribulations that come with it. It also makes me feel like a lazy lump. Her passion for writing have been a serious inspiration to get back into the groove myself. No more half-assed excuses.

Joan's bio: Ever since Joan Mauch excitedly recognized the letter “A” in a newspaper at the age of six she’s been fascinated with the printed word.

Over the years she became something of a vagabond, having lived in Washington state, Oregon, Illinois and most recently, Iowa working at everything from teaching to selling real estate. Vacations are spent in the company of her son enjoying the Gulf of Mexico.

You can find out more information on her website. And you can check out her book here. It's free until July 17. 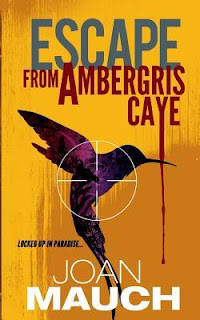 In this chilling tale of kidnapping and intrigue, TV cameraman Jackson Taylor frantically searches for his reporter friend Izzie Campbell who has gone missing. In spite of the threat of being fired from a job he loves, Jackson pursues the matter with help from his free-spirit brother Zac. The terrifying scenario plays itself out from the sunny beaches of Florida to a tropical island off the coast of Belize. When Jackson gets locked inside a steamer trunk on its way out of the country aboard a trawler yacht, Zac must battle not only to save Izzie's life but their own.


Her newest novel, and her first self-published one, Escape from Ambergris Caye, is free right now for the duration of this giveaway, July 14-17. If you download the book and plug in your order information you can get lots of extra entries for the giveaway.


Rules: This giveaway is open internationally to anyone who is able to receive their prize as an Amazon gift. One lucky winner will receive a $5 Amazon e-gift card to purchase the next book on their summer reading list.