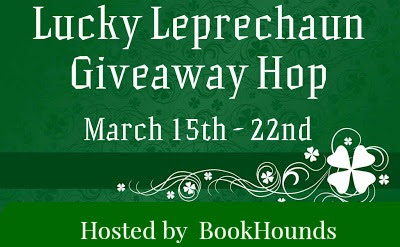 A special thanks once again to Bookhounds for hosting this giveaway. I may not be Irish, but I do love the enthusiasm that surrounds St. Patrick's Day. While I'm well versed in Greek, Roman and some Egyptian mythology, I can't say I've even really delved into ancient Irish legends. At least, that is until I stumbled upon The Fianna Trilogy by Megan Chance. This series will introduce the infamous Fianna warriors who find themselves in early 19th century New York City centuries after their time.

Grace Knox has grown up hearing the folktales of her Irish ancestors, especially about the warriors who fought for control of Ireland. In 19th-century New York City, however, these legends are far from Grace's mind. She's much more concerned with how to protect her family from debt collectors, and whether her childhood friend Patrick Devlin will propose. Patrick is a member of the Fenian Brotherhood, a group of young Irish American men intent on fighting for the independence of their homeland, whatever the cost. Patrick and the Brotherhood use ancient magic to summon mythical warriors to join their fight to protect Ireland. One of them, Diarmid, finds himself drawn to Grace, and she to him. When Diarmid discovers that, in their desperation, the Brotherhood has also summoned a rival group of ancient warriors, he warns Patrick that there will be bloodshed. Grace is caught in the middle of two men she loves, and discovers she alone holds the power to save Ireland... but at a dangerous price.

In Victorian New York, seventeen-year-old Grace Knox is tangled in the web of an ancient prophecy.The Fianna, legendary Irish warriors, have been magically called from their undying sleep to aid Ireland in its rebellion against Britain. But the Fianna have awakened in New York alongside their bitter enemies, the Fomori. A prophecy demands that a Druid priestess—a veleda—must choose between these two sides. Grace is this veleda.But being the veleda means she must sacrifice her power—and her life—to her choice. On one side are her fiancé, Patrick Devlin, and the Fomori. On the other are the Fianna—and the warrior Diarmid Ua Duibhne, with whom Grace shares an undeniable connection. Patrick has promised to find a way to save her life. In three months, at the ancient ritual, Diarmid must wield the knife that kills her.Grace doesn’t know whom to trust. As dark forces converge on the city, she struggles to discover the truth about her power. Can she change her own destiny? Can she escape the shadows of the past and reach for a future she could never have imagined?

Great stones crack and split. Storms will tell and the world is changed...Seventeen-year-old Grace has found the archdruid who can teach her to use her power as the veleda—the priestess prophesied to save Ireland. But nothing is as it should be. The archdruid is a dangerous fairy, and Grace can’t learn the spells, no matter how hard she tries. Something is wrong...but what?Meanwhile, gentleman Patrick Devlin and warrior Diarmid Ua Duibhne both struggle with their love for Grace, their duty to their warring brotherhoods, and their support of Ireland. And New York City is in chaos with protests, immigrant gangs, and police crackdowns. The only hope for the future is the ancient ritual, just weeks away, in which Diarmid must take the life of the girl he loves.Secrets, legends, and prophecies collide in an explosive finale that will save the world—or destroy it.

Rules: This giveaway is open internationally to anyone who is able to receive their prize as an Amazon gift. One lucky winner will win their choice of any book in the series.